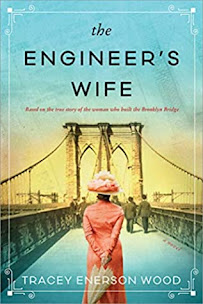 The Engineer's Wife
by Tracey Enerson Wood
My rating: 4 of 5 stars

Whenever I read fiction based on a true story I go in skeptical. Does the story feel too perfect? Is our lead character too strong or too unbelievable? And while there are people in the world that are incredible human beings; the reality is that most of us are just average and incapable of most feats in our favourite novels. In The Engineer's Wife it's 1865; and so women are arm candy, the suffragette cause is protesting forward, and white men believe themselves to be the best of the best. Our lead character is the wife of the primary engineer whose tasked to build the Brooklyn Bridge. While the story is fascinating, deadly, and awe-inspiring at times in the end I can't quite give it five stars because of the romantic entanglement story (completely fictional). I will credit Tracey Enerson Wood however with being very honest in the afterword about what is true and what is not in this historical fiction novel.

Romance
I'm not a sucker for romances to start with; so anytime you want to try and justify why people should just fall into one another's arms instantly, or be compelled to cheat on their spouses because 'OMG the other person is just so amazing' (gag), it's going to be a hard sell. Yes I have a long-time spouse. It's a man (although be a woman) whom I've been with for 12+ years. We are not formally married (but call one another husband and wife). Neither of us is overly romantic or into the big gestures. Due to my health situation we don't have a ton of sex; nor do we take part in any overly romantic events or affairs. Why? Because that is not what the core of a relationship should be in my opinion. So when you give me a romantic story line that is seemingly 100% focused on the idea of 'good sex' and on grand moments of passion I will always remain unconvinced.
This is the problem with the developing relationship between our engineer's wife and P.T. Barnum (yes the circus man). The reality is it doesn't work because (most importantly) it probably didn't happen. This is man who made circuses famous, widely supported the thirteenth amendment to abolish slavery, and whom months after his wife of many years died married a woman 40-years younger than him. Barnum was a man of action, excitement, thrills, and didn't wait around for things to happen, he made them happen.
Thus the romantic side story and ridiculous insertion of Barnum is the entire reason this is not a 5-star book for me. While Barnum had some connection to the bridge construction; it's as though Wood thought no one would care to read the story without a famous historical figure to tote in the back blurb. I'd have much rather Barnum had a couple cameo's here or there like history tells it than have him smooching the engineer's wife time and time again.

Caisson Disease, the Bends, Depression Sickness
No matter what you call it, depressurization's affect on our bodies is intense. Those darn air bubbles wreak havoc on our ability to breathe, thus affecting the amount of oxygen our brains are getting and from there can ruin just about every aspect of how your body functions. I had no idea prior to reading The Engineer's Wife how prevalent caisson's disease was for construction workers, or the exact physics and math behind building giant bridges that was used in the late 1800's. It's impressive to me that humans were able to fathom these structures and then ultimately build them. However, they came at a price. Many lives were lost during construction of the Brooklyn Bridge and many others were destroyed from caisson's disease; including that of our primary engineer. There is a lot more death and sickness in this story than you might expect.
Caisson's disease is how a woman *gasp* ends up working directly on the Brooklyn Bridge plans and construction. If you want to be outraged by the way women were treated back then this is a great book to show it. With many references and lines like:

The Science and Math
I love how Wood gives enough details on engineering the bridge to whet my appetite; without going into vast amounts of detail. I understand tensile strength of steel cords, caisson building, weight allocation, and other engineering concepts better than before I read The Engineer's Wife. Yet, I never felt like the science and math were too belaboured. It is a real feat to balance a woman's suffragette story with a task as huge as building the Brooklyn Bridge. Not only does Wood do a good job in authoring this story but our leading lady does all the hard work fighting back every step of the way.
Everyone around her is gossiping, making fun, questioning her abilities, and/or deciding what political causes she can associate with because of her involvement in the construction. It makes me feel like my stories of being over looked, sexualized, or underestimated because I'm a woman are nothing next to hers. I can't decide if she would be pleased by how far we've come; or disappointed in the ~75% wage differential, number of female CEO's, that we still divide 'women's work' up in today's world.

”I set back my shoulders. To be successful in a man’s world, I would be strong.”

Overall
I did really, really enjoy this book. It's a fascinating time in New York as huge high-rises are being raised, bridges are reaching across water, and women are fighting for their rights. Wood does a great job of keeping the pace of the novel up, even if it does mean that some events are skewed (especially near the end of the story). I could forgive all of them if not for the ridiculous Barnum romance aside. Luckily the romance is not the crux of the story and each time it came up I could look forward to the next visit to the bridge site our leading lady would make or moment when she conferred with her debilitated husband over the building plans.
If you have ever had any interest in this time period, bridge building or the history of New York City I would highly recommend you read this book. Wood did a great amount of homework to put this story together for us and I"m so glad to have learned about Emily Warren Roebling and her immense contribution to the New York City skyline; and proof that women are just as smart and capable as men. I hope that I can continue my career and life in a male dominated industry (software development at this moment) with even half the dignity and courage that she had.

"Let them talk. Gossip has always been spread and there is nothing to do but to live ones life as best one can."

Follow me on Goodreads
Posted by Mel at 11:37 PM

Uh, female engineers? Count me in! Although it sounds like it could live without the romance, but I kind of like Barnum so I guess I'll be able to endure :D (Also, totally agree...any relationship based solely on sex and passion will probably never get past 'romance' status, as far as I'm concerend).