I started Fa La La by LNH last week on holidays. I have changed the colour in the first girls dress from green to purple (just wanted to give it some more colours). It's stitched on Cafe 28ct Linen.  Here it is so far (this is a sad pic, sorry I was tired when I took it): 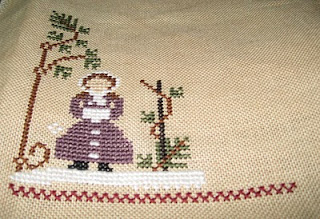 I got a lovely surprise in the mail the other day. Becka who won one of my giveaways last months sent me the cutest cross stitched card and a few skeins of DMC. THank you so much Becka!!! Here is a pic of what she sent: 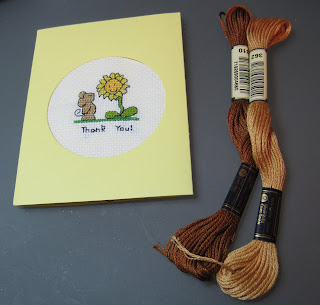 I did not take dragons out yesterday as it was BF's birthday and we have so much going on with a dear friend of mine permanently moving to Europe at the end of the week. So I may have to wait until after retreat on the weekend to update you on Dragons. But if I get a chance I will see about updating Thursday before I go.
I can't wait!! I am taking a bracelet class at the retreat, hopefully it turns out good. I also need to kit up my autumn/fall ornament for the ILCS Yahoo exchange that I enrolled in. So lots to come for sure!


Thanks for visiting and all your kind words on Cherly's Bouquet and my holiday pics.
I am terribly behind on commenting and checking out blogs. My apologies, I will try to get around in the next few days.
Posted by Mel at 12:17 PM 7 comments:

We are back from holidays. This update has mostly holiday pics but will also have an update on Cheryl's Bouquet at the end. (so those who just want stitching just scroll down).

We had a great time in Panorama. It is a secluded mountain village just outside of Invermere. We were in a condo (that we got for uber cheap, so awesome). It was sunny and beautiful. We hung around the pool, had great food and enjoyed a short hike at the top of the sightseeing lift. Here are a few pics. (keep in mind these are in the BC Rockies so less impressive, if you will, than the Canadian Rockies that are near our home, but still mountains, just less pointy) ;)
This shot is from the bridge just behind our condo. You can see the building where we stayed on the side of the river (it's taken at dusk so the colour is off, my apologies). 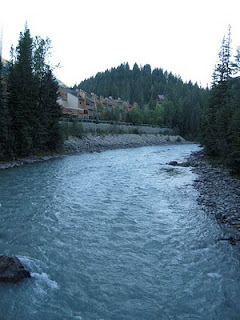 This next shot is from the top of the sightseeing lift. You can see the resort below There is a bit more to the resort than you see, but this is the main area with the pools and such. 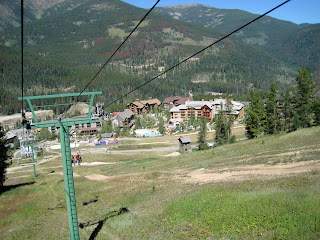 From the top of the sightseeing lift this is the gorgeous view. This is more than 5000ft above sea level.
Very high! This is from the downhill World Cup route that is an open clearing on the hike we went on. 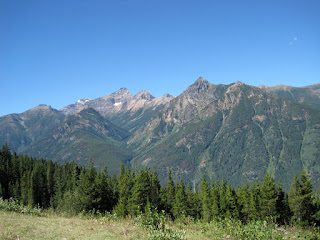 We went into Invermere, another resort style town (they have a big lake) for an afternoon and found this huge Inukshuk. So here is me pretending to also be an Inukshuk. ;) 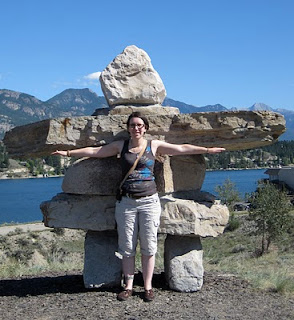 We had dinner in Invermere at this great place called Ray Ray's on the beachfront. This fountain was also just next to it. (can you see the rainbow?) 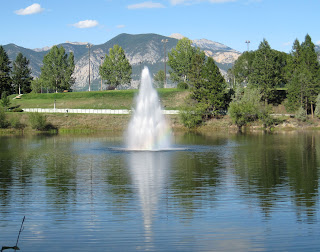 On the stitching front I worked on Cheryl's Bouquet last weekend and made great progress: 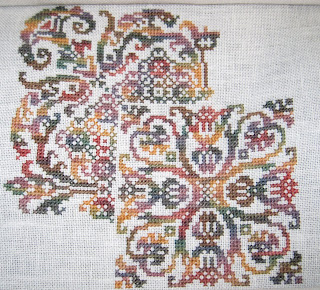 I started on Fa La La ornament from the LNH 12 ornaments series. But didn't take a pic yet. I know bad me. So a pic of that, and an update of dragons will be due in the next few days (and trying to finish up on the bellpull for Hummingbirds, so will share that when it's done). It's a bit crazy this coming weekend/week as my best friend is moving to the Netherlands and we are doing lots of stuff for her before she goes. BF's b-day on Monday and then retreat next weekend. Whew, and I gotta go back to work. lol. So lots coming up to share in the next few weeks.
I will also be holding another giveaway later in the month, likely a Halloween/Fall theme as it's my favourite time of year! (I just signed up for the ornament exchange for Fall on ILCS Yahoo Group... so gotta get cracking on that too). Wow, I've exhausted myself just typing all the things I have to do.

Thanks for visiting and for all your comments. :)
Posted by Mel at 6:22 PM 18 comments:

Sorry I have been away for awhile. I was not feeling great at the beginning of the week and it just threw everything off. I think I have things back under control for now. Here's hoping it stays that way for a bit.

I do have an exciting finish to share with everyone. I got the Hummingbirds for my Grandma complete. Here they are:

And here is a perspective shot: 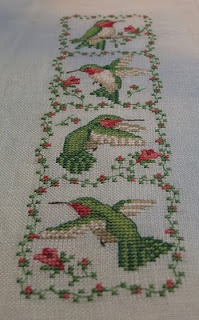 I am going to make this into a bell pull. So I did the first coat of paint on the bars last night. It will still need a second one. And then I have to back it and sew it on. Hopefully it turns out good. (I would love to have this complete by Sunday so I can show my Mom when I see her)
Here are the bars: 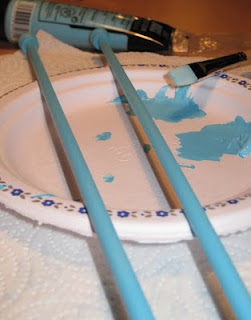 Thanks so much for continuing to visit me. I know I'm not quite as active as I once was. I am still hopeful that I will get there again.

Next week the BF and I are on holidays. We are going away for four days to a condo in the mountains. So I will be offline for sure most of next week. However we'll be sure to take lots of pictures and share them with all of you. And I am hopeful that I can get some good stitching time in!  (If the bell pull gets done or I have anymore exciting updates before Monday I will post here, otherwise I will be back at the end of next week)

Hope everyone is having a great summer!

It was the Rose HAED SAL weekend on the BB. I still love working on her sooo much! But it was a busy weekend so didn't get much stitching in.
Worked on an art project for my friend that is moving to Europe in a few weeks during my stitching time, so still time well spent, but not anything I can share sadly.
Here is Rose to date: 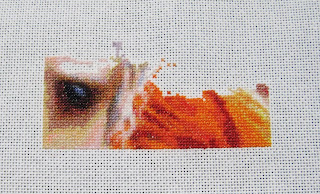 I also had the opportunity to see the Backstreet Boys (BSB) on Sunday night. What a great blast of the 90's. I loved them as a pre-teen/teenager and gotta say it was nice to be taken back. They still have it.
Here is a pic from the show: 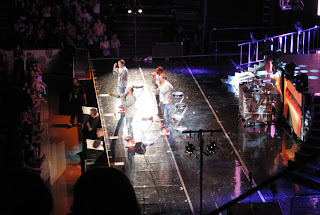 (I took almost 100 photos and can you believe this is the only remotely good one, sad I know).

This week continues to be quite busy with errand things like haircuts and dentist, plus of course work. Though I am hopeful to get more work on Dragons in later in the week.


Thanks for visiting! And as always I appreciate each and everyone of your comments! :)
Posted by Mel at 2:38 PM 13 comments:

I had a lovely long weekend this past weekend. It included 12 hour stitching at my LNS. These are so great b/c the company is awesome and I get lots stitched! (even if I have to frog now and again b/c I loose my spot from talking). :)

First up today. Dragons.
I have really cruised on this one in the last five weeks. I have 1/3 of the next page already complete! :)
The page I am working on: 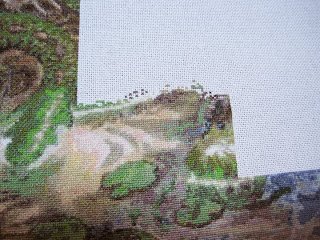 The piece to date: 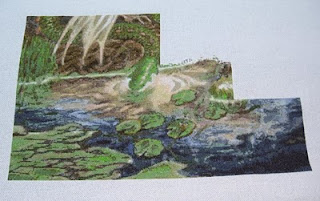 Next up. Hummingbirds
I am very pleased with how these are turning out. Even if I hate doing the backstitch. Here we are with three hummers complete. Just need to do the third border and then just one more to go! I am hoping to complete this by my retreat (on the first weekend in September) so that it can be part of show and tell! 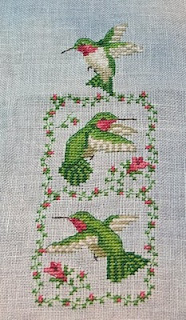 Elfland.
I am still trying to get this one done. I actually gridded down to the bottom of the next page (these are done opposite of how I like to stitch b/c that is how we receive them in the SAL). I was a bit nervous that my count would be off, but so far so good. (sorry this pic didn't come in very good, too dark)

And the most exciting part of my week: I got a RAK from Louanne!
I helped out with the redesign of the Our Friends SAL Blog so that it looks more like the HAED brand. (thank you to Michele for allowing us to use it) and Louanne soooo graciously sent me this HAED chart as a RAK! 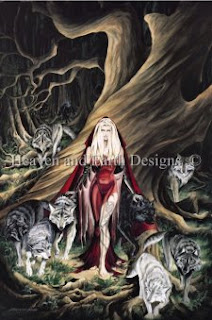 Thank you, thank you Louanne!


Our summer has been very cold this year... and it doesn't look to be getting much better. But hey it makes for lots of stitching time. ;)
However we are on holidays in a few weeks so I am looking forward to that. B/F and I have a condo (that was generous donated to us for four days at no cost) that we are going to. It will be our first 'real' vacation with just us! I'm looking forward to it. And of course then my first retreat in September! I just got the info for the weekend and am sooo excited. It is being put on my LNS (where I go for 12 hour stitches).

Everyone has such great looking projects! I have been getting around to blogs, still slow but hopefully I'm getting to everyone's.
Thanks for visiting and happy stitching.
Posted by Mel at 10:56 AM 18 comments: