That's right I did it! Another month of zero spending. Since the "big blown budget" day (early March) with Jeannette I have spent zero dollars on stash! I know many of you are thinking, well that's not all that impressive Mel, but for me it really is (sadly).

Dragons Update:
If you can believe it... I am about 4 hours away from finishing Dragons!!!
I've gone from 86 colors down to 1 color remaining to stitch with. It's large blocks of stitching, so kinda boring but quick. This means I should *fingers crossed* finish Dragons well in advance of my deadline this Friday!!!!
My one color left is DMC3823 (pale yellow) stitched on ivory 25ct evenweave. Like I said, real exciting. LOL.

Sorry no pics today as I'm wanting to make the next update be the completed Dragons! So here I go, chat soon.

PS: Sign-ups for Stitch from Stash 2015-B (Part 2) are opening very, very soon. Watch this page for more information in coming days. :)

The mad rush is on... to try and get Dragons completed, framed and into exhibition/competition for June 24... I won't lie; it's not looking all that good.
Yes Dragons is coming along, and I made some amazing headway on the past long weekend we had here in Canada but I feel it's still not going to be enough. But we will see and I haven't given up hope yet. 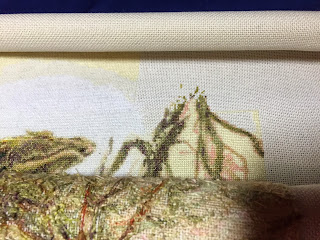 While working through Dragons this time around I've been trying to get the smaller sections of changing color stitching done first. So up through the tree and branches. It's resulted in a really interesting look that to me is like a volcano.
So here's a quick snippet of last page of Dragons at almost half the page stitched. So close!
Can you see the volcano? 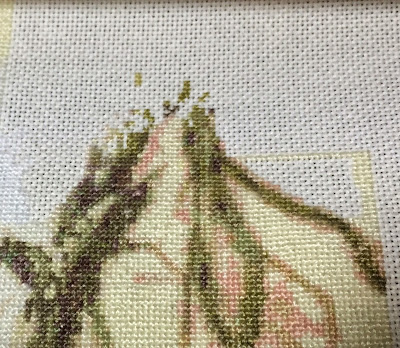 Every time I've picked up Dragons (almost every day this last 10 days in a row) I've gotten "The Final Countdown" song in my head. It truly is the home stretch here. So funny that 7.5 years of work comes down to a couple weeks to meet competition deadline. (PS: If I don't make this years deadline I can enter next year, but I'd really like to enter this year).

Thanks for stopping by and reading! Happy Stitching.
Posted by Mel at 11:25 AM 11 comments:

May Reporting Link for SFS2015-A


Of course we want pictures and more information if you'd like!! This is merely the minimum requirement for reporting. Please ensure you link to the exact SFS post on your blog and not your general blog page.


Issues, concerns, confused, etc?
Please feel free to leave a comment here and I will respond via email or comment back if you don't have an email connected to your blogger profile.
OR
Email me (Mel) direct at stitchfromstash@gmail.com
Posted by Mel at 11:16 AM 3 comments:

Well... another month, another report.
I have to say that I didn't spend any money this month on stitching (hurrah!)... except I did spend an obscene amount of money at our local Comic Expo... my Harley Quinn obsession is starting to get out of hand according to my DH. (lol)

I have no stitching to report. I know terrible. But Comic Expo has been all consuming since middle of April. And I spent so much money that we are joking that our house is on the "KD budget" for the next month. I suppose at least that means I'll have another zero dollar spending month on stitching!! :)

So, forgive me the rest of this post is going to have nothing to do with stitching. Feel free to wander elsewhere if you're not interested in my fan girl activities.

Comic Expo - Calgary
I have been attending the local Expo here in Calgary (where I live) for the last 7 years. Each year has had lots of great celebs, shopping and sessions; but been plagued with crazy bad organization. I'm so pleased to say that this year, while the celebs were not quite as epic, the organization was bang on. And frankly having a good time is more important than having a million good celebrities (in fact maybe that's why it was better...) 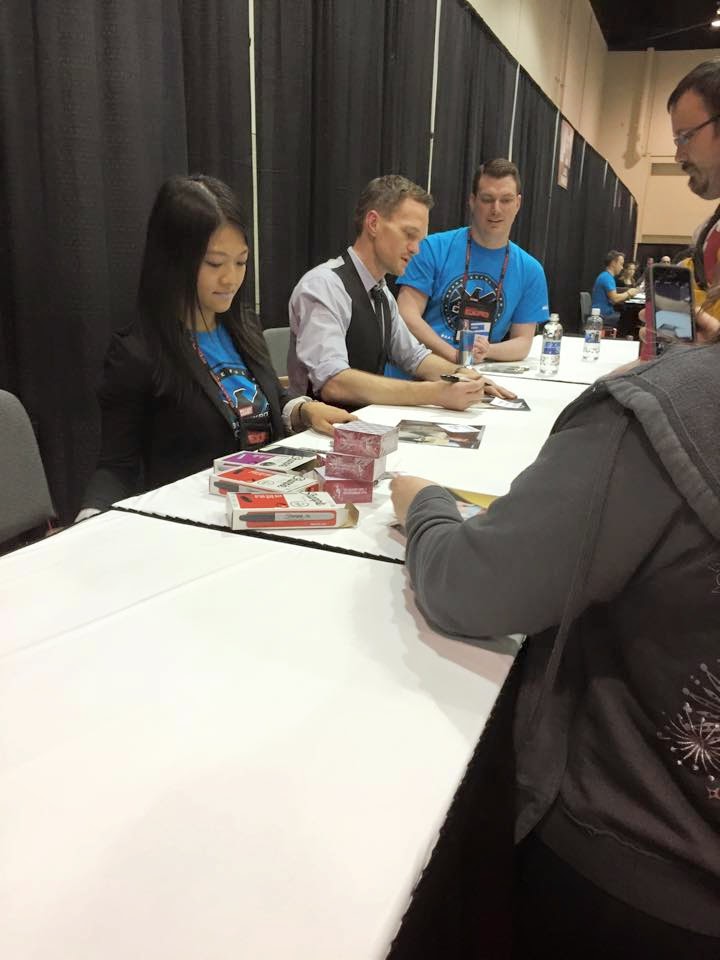 Last minute they announced Neil Patrick Harris!!! It was shocking as NPH has never done any Expo except for San Diego (the largest in the world). So we couldn't believe he was coming to little ol' Calgary, Canada! I got to meet him, get his autograph and hear him speak at a panel. It was a great addition to the Expo and easily the best celebrity guest (but not my favourite moment). To the right is Neil from the autograph line-up.

I was especially excited, prior to NPH being announced, to meet Chad Hardin. He is the current artist of Harley Quinn in her own series of DC comics. Don't know who Harley is? She is the paramour of Joker and often seen by his side. She first appeared in the Batman franchise in the animated Batman from the early 1990's (when I was prime age for cartoons).
To say I was over joyed to meet Chad would be an understatement. He was a super nice, personable and real person. Zero ego to be had. I got to commission him to do my very own, exclusive pencil sketch of Harley Quinn (for a pretty penny) that is absolutely worth every penny I spent on it. We're going to get it framed up and put it on the wall: 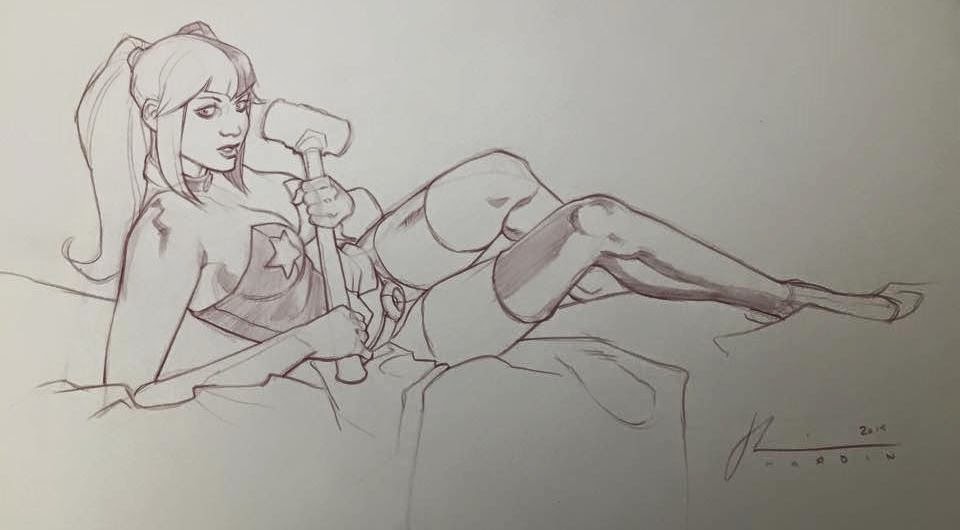 The sketch above is currently my pride and joy. It's actually sitting at home (to be framed) right next to my Jeannette Douglass stash from last month! 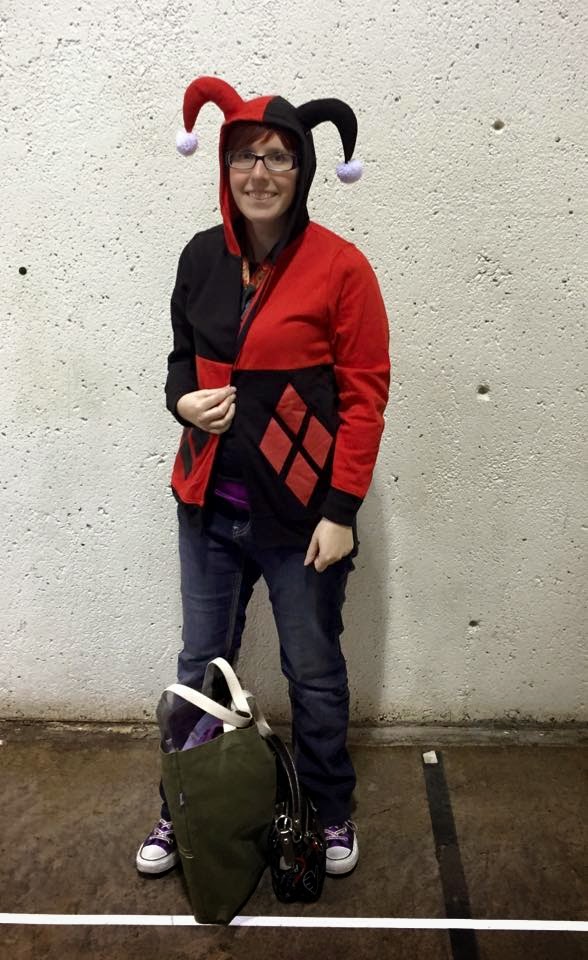 In addition to NPH & Chad I also met; David Morrisey (the Governor from Walking Dead), Kristin Bauer (Pam from True Blood & Malificent in Once Upon a Time), Carl Weathers (Predator plus lots of other movies over the years).
I bought a bunch of comics including a first edition of a series called Gotham City Sirens that stars Harley Quinn (surprised? haha), Poison Ivy & Catwoman. It was a bit of investment but in great shape and the only copy I saw all weekend amongst the dozens of comic booths in the market.

There you have it, a short but sweet update about what I've spent my last little it obsessing about. I've been (of course) reading lots of comics and getting tied up about what Harley Quinn is going to look like for her big screen debut in forthcoming DC Comics "Suicide Squad" movie. (don't ask what I think of her look that we've seen to date as it's a rambling worst than this post).

If you stuck to the end of this good for you! And thanks for caring about part of my non-stitching life. Dragons is going to get picked up by weeks end (finally) and I really do need to pick up the pace to make my end of May deadline... eek!
Posted by Mel at 8:00 PM 12 comments: