Well it's halfway. I lost the Stitch from Stash budget challenge wayyyy back in March but did have 2 months of no spending which is quite impressive for me.
And yet I couldn't extend it to June. After finishing Dragons I felt like I *had* to get a couple new things. So took advantage of some eBay deals.
Spent: $22.50
Earned: $20.00 (1 page finish on Dragons) 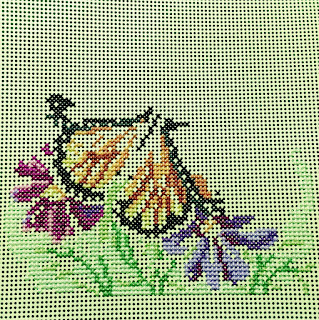 New Start - Monarch Butterfly
Following the finish of Dragons I wanted something simple and easy so I started a Mill Hill design on perforated paper called Winged Monarch. Only done some stitching so far but did sort beads and love all the great bright summer colors in this little project.
These kits really are fantastic and perfect for really chilling out and stitching. Besides for the price they are also a great deal in my opinion. :)
I think Mill Hill just released their Halloween line which is dangerous for me... 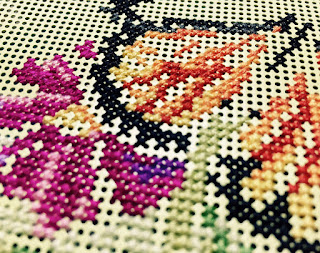 Of course we want pictures and more information if you'd like!! This is merely the minimum requirement for reporting. Please ensure you link to the exact SFS post on your blog and not your general blog page.

http://rahenna.com/sfs/
Issues, concerns, confused, etc?
Please feel free to leave a comment here and I will respond via email or comment back if you don't have an email connected to your blogger profile.
OR
Email me (Mel) direct at stitchfromstash@gmail.com
Posted by Mel at 6:26 PM 1 comment:

Thanks to everyone for their patience. I know some of you have been waiting to sign-up for SFS2015-B!
B (or Part 2) of Stitch From Stash is now open to sign-ups for new members!

Please see all the rules (below the sign-ups list) before committing and keep in mind this challenge is not for everyone.

Sign-up & Rules:
http://epicstitching.blogspot.ca/p/rules-for-stitch-from-stash-2015-b.html
Or you can always view the rules & participant list by clicking the SFS2015-B tab above.

Any questions or concerns please feel free to email: StitchFromStash@gmail.com
or post in the comment below.
* If you'd like to participate via email only (no blog) please send an email to above e-mail address and request a spot. I will be taking only 20 email members so don't delay.

How can I even start the post that has been almost 8 years in the making?
All the photos interspersed in this post are from the finished piece. All photos can be viewed larger by clicking on them.
All items in italics are 'personal milestones', all else are stitchy related (in case you want to skim this post). :)

THE JOURNEY OF DRAGONS

Why Dragons?
For those of you who haven't been long time followers, some history:
- Dragons was chosen by my uncle (who is like my older brother with only 9 yrs separating us, and he lived with my family when I was 11-12).
- Started following a break-up with a very rich, snobby and he's-not-that-into-you-guy.
- I needed an 'epic' replacement for given-up-on larger Disney project that I had imagined as my potential non-existent childrens nursery piece. The giveaway of the partially done Disney project also symbolized my understanding that I was unable to have children (which is a-ok) and accepted the truth of my likely future.

Therefore, I needed a replacement project.
My uncle and I agreed to "Judgement", design by Character Creations (Kerry Blackwell), artwork by Lisa Hunt. The art is from a Tarot series that Lisa Hunt did back in 2007 or so. The whole set is absolutely gorgeous!
I know what you're thinking, why not a HAED. We looked at HAEDs, but "Judgement" just seemed like the right choice. I told my uncle it might take me a year or two because of it's "complexity". Boy was I wrong! LOL! 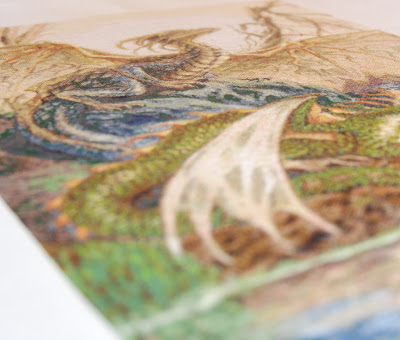 "Judgement" was started in August of 2008.
87 colors and over 100 skeins of DMC thread were bought (I have quite a few skeins left over). Ivory 25ct evenweave was selected with the help of some local stitchers. After a couple of test I decided on  1 over 1 and was okay with the potential "loss" of coverage in the darker areas in order to avoid the bulkiness that I thought (still do) think 2 threads brings on over 1 on 25 ct.
The same year that my now DH and I got back together, we were in a high-speed truck rollover on the highway (in the snow).


Epic Stitching Blog Begins - March 2009
I started this blog originally because I needed a way to motivate myself to work on Dragons and wanted to reconnect with the online stitching world I had briefly forayed into in 2007 with a different blog (that I can no longer find sadly, long since erased by the interwebs I suppose).
I did not ever foresee myself 7.5(ish) years later posting about this finish. I saw it, at that time as a 3-4 year project. I was still sooo wrong on my estimate of time!
A huge call out to some of my first followers and encouragers in Meari, Evalina and (the greatly missed) Rene. I know so many more of you were there for each and every post and I truly appreciate that more than you can know.

In March 2009 I was also living in an apartment with my now-DH and starting to really feel the effects of what was later determined to be vertigo and issues from our truck rollover the year before. Dragons became my one constant that I could always rely on. Like a good book you read over and over again. 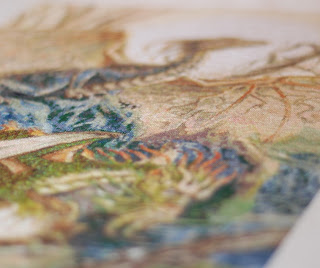 February 2010 - Coining 'Dragons'
Sometime between 2009 and 2010 "Judgement" piece got renamed to Dragons. It was just easier. I never meant to mislead anyone and did try to remind people it wasn't a HAED in some posts but honestly it just got tiresome and so it was thereafter known as Dragons to me both online and offline. I don't know that I ever called it Judgement after that.
In Feb 2010 I had major health issues starting to compound. A gallbladder surgery that was only "successful" in that they got my gallbladder out without killing me. Not so successful in that I had a litany of issues and many of which I am still medicated b/c of today. Epic Stitching went on a hiatus in Mar-Apr of 2010 as I just couldn't handle much at the time. Epic Stitching came back online early-Fall of 2010.

January 2012
Halfway!! Now you're about to see what really got in the way of completing Dragons... it wasn't my health (like I thought) and it wasn't buying a house, traveling to Holland or having a full-time permanent relationship with the man that (one day) might marry me but is my common-law partner and DH today (just without the official piece of paper). Nope in fact it was the Etsy shop... 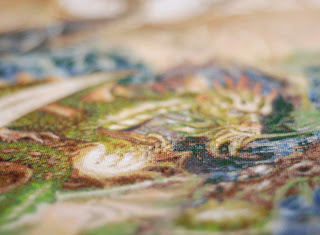 June 2012
I officially changed careers from an Art Director in magazines to a regulatory technician. Yep it's a boring paperwork job. This was a milestone for me personally as it gave me a 9-5 job, more time for Dragons, (hahaha) and wayyy less stress. This was also the official start of Epic Stitching on Etsy. And the beginning of Dragons being neglected (truth hurts).

April 2013
A new house (first non-rental), a trip to Holland and so much stitching that didn't include Dragons. Etsy shop has really taken off by now and is taking up about 1/2 of my stitching time I used to have. I swear that without all of my followers and supporters I wouldn't have stuck with it. Carla started making comments that always asked about Dragons if it had been too long. I knew I needed to get to it if Carla had bugged me! :) 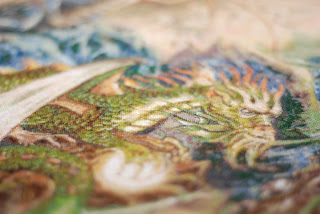 December 2013
Stitch from Stash was born. Again taking away time from Dragons (lol). This was the first year of us living in our own home and cutbacks had to made in stashing. While I may have had more room to store my stash in our house than in the apartment; I certainly didn't have more money (darn utilities and property taxes)!

2014
A push year. This was a huge year for the Etsy shop and I really did try to concentrate on Dragons when I wasn't doing Etsy stuffs. Stitch from Stash had it's first full year with a great group of ladies!

2015...
I had a goal in January of this year. I wanted Dragons done, actually done, in time for entries into the Calgary Stampede Western Showcase Arts & Crafts Competition. All entries had to be registered by June 16, 2015. The deadline of June 6, 2015 was firmed up as being the "drop dead date" in order for framing to be completed.

One week ago today... June 6, 2015
I finished stitching Dragons!!!! It was bittersweet and exhilarating all at the same time. It reminded me of high school grad a bit. When you know you've moved on and completed something great; but still have a ton of future to consider.
Right now, I'm savoring my finish. I am getting stressed thinking about what will be the next "epic" piece. There will be one that I know. But with 50+ HAEDs and dozens of other large projects of the "full art, no backstitch" variety I have to really think about it and want the DH involved in the decision. We may take it to a poll here... maybe. ;)
(Postscript: I had my long waited MRI on Tuesday this week, results this coming Wednesday. Wouldn't it be so fitting to have an official name for all my health issues in the same month as Dragons is finished? It would be almost divine as my health has been so much a part of Dragons progression in my mind). 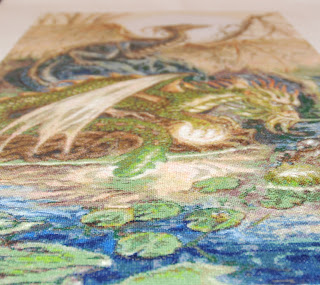 A Retrospective: What Do I See in Dragons?
A lot of work, lol! And a lot of stitches. I see my health issues over the years, my life-long partner and I choosing to live together, changing careers, buying my first home and did I mention a lot of stitches?
I also see my online stitching friends, stash bought, other projects like Cottages, LK's Halloween and other stitching endeavors that detoured Dragons to take 7.5 years to complete.

Above all else I actually think I see 7.5 yrs of my life brought together into one beautiful piece of art that I can say I did all by myself and never gave up on.
We may not think about it much but our stitching is really a representation of the progress of our lives. Remember that piece you did when you got married, had a baby, bought a home or moved somewhere? Those are the stitches that represent your life and the change in it.
(This is easily the sappiest thing I have ever written, don't worry I'll be back to my much less sappy self next post.)

So let me share my sign of relief, a tear or two and absolute excitement that "Dragons" is finished. I look forward to the next chapter of my life that will be documented in more stitches. I hope there are many more "Dragons" in my future that I can look fondly on and see many highs/lows and a personal journey within their completion. It's not about the finish, it's about the journey. 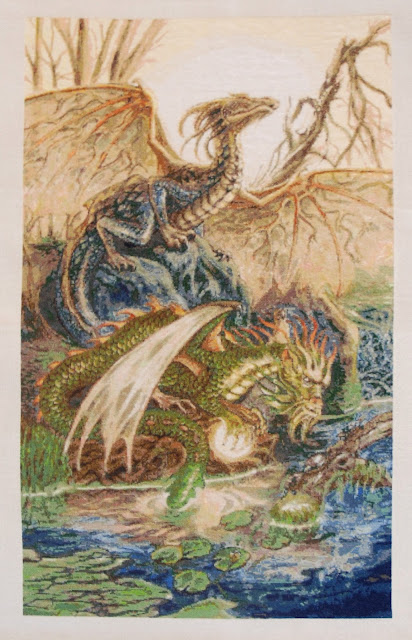