Book Review: The Shoe on the Roof 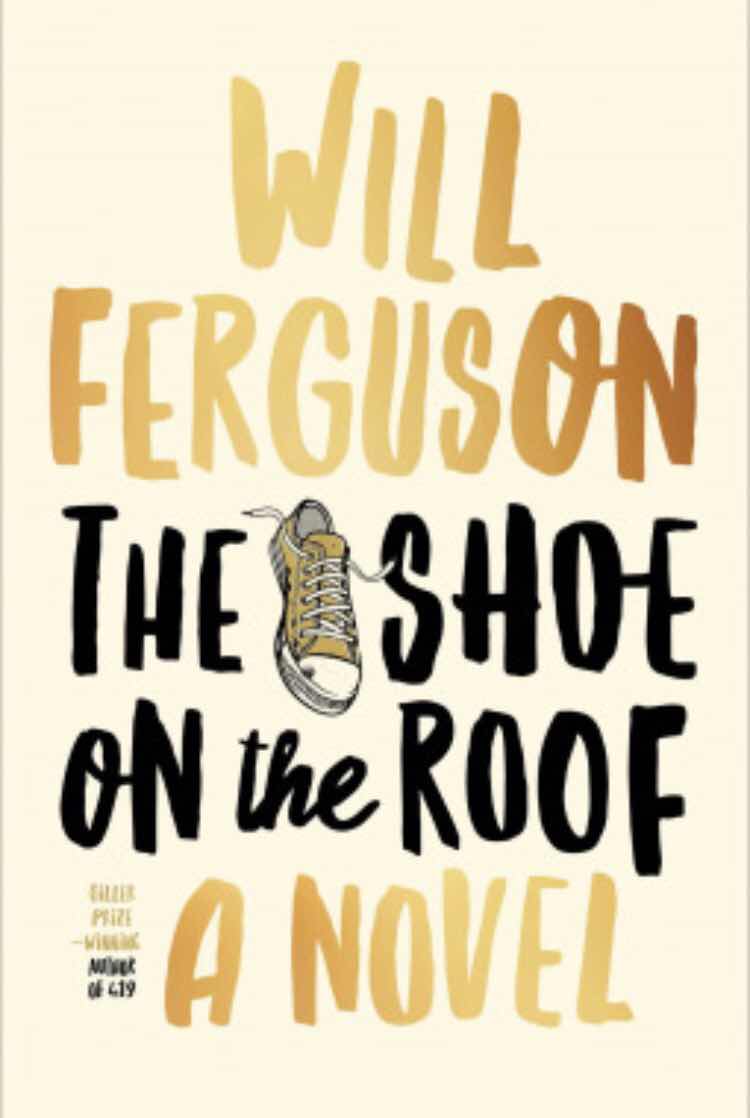 Title: The Shoe on
the Roof
Author: Will Ferguson
Genre: Contemporary fiction, literature, Canadian
Rating: 3 out of 5 stars
As always Will Ferguson has immaculate writing. I always really enjoy his writing style, pacing and flow. Without a doubt this Canadian (and from my local city, Calgary!) has a writing ability that is far above many others who write fiction novels (of any kind).
Science-y
As with any book with a scientific focus there are a lot of technical aspects that Ferguson has to explain to us. These were probably my favourite parts of the book. Ferguson adapts a style reminiscent of Michael Crichton or similar to Mira Grant, in which he is 'teaching' the reader at a high level what it may mean to do certain tests or control environments, etc. I found this very palatable and interesting.
Plot
The Shoe on the Roof has a very obvious and linear plot. There is our lead guy who is researching the idea of how god exists in the brain. He falls in love, loses the girl and then finds out her brother believes he is Jesus Christ. So lead find wants to help girl's brother and so he pursues three people who believe they are Jesus Christ and begins therapy/testing on them.
Simple right? Sure, until you get into the psychosis of our leading man... or and the random mystery thrown in.
The 'real' story
I would argue that the short plot summary above is in fact not the plot at all. The actual plot is three-fold:
1) Is there a scientific way to definatively prove that god does not exist?
2) Is our leading man too mentally broken, himself, to have an objective opinion.
3) There is an emerging mystery that pops up mid-way through
It's clear that Ferguson feels the idea of god and mental health to be a very complex (and he's correct) topic, and one that depending on your viewpoint can be discussed for eternity. That is really the story here in my opinion. One about mental health, god and the idea of what people believe and why.
So why only 3 stars?
There are a few reasons why The Shoe On the Roof didn't resonate with me as much as the stellar bestseller 419 from Ferguson.
- I didn't get excited about reading it; or sad about putting it down. Overall I was very blah about reading the book
- I never really got a sense for the main character. I wanted more from our leading man. I wanted to really understand his childhood that involved being studied. There is some of it there, but that is the story I think I really craved. I'd have rather read about his childhood than his endeavor to enter the medical profession.
- The mystery kind of popped up and was clearly side-story until the end when it suddenly felt like main story. I didn't like this transition and it took away from our main characters overall pursuit of science in the end.
- I had some fundamental concerns about how certain topics (especially mental health) were portrayed here...
Mental Health Portrayal
As someone who never really understood mental health; and used to think people could just 'get over' things, I was disturbed by one of the messages that you could derive from Ferguson's characters. Especially because it comes from our 'expert' doctor. As someone with a medicated anxiety disorder it is disturbing for me to read that mental health may not a physical problem, but instead more an emotional or social one. While this is true at the core of it's essence; the doctor then goes on to talk about how you just have to change the patients 'cognitive' function.  It really  disturbed me that this was too easy a way to easily dismiss mental health as something the person just needs to 'fix' or get therapy to 'fix.
That said, I am 90% sure that Ferguson is actually trying to get readers to think outside the box of medications and therapies for mental health. That is in fact (I believe) the whole point of our lead man's perspective and scientific pursuit. He has the idea that maybe we are approaching problems from the wrong angle or perspective. And I certainly understand this is the purpose of the book. But it doesn't diminish how uncomfortable I was thinking someone might walk away with the wrong idea and just assume that mental health folks are just weak and need more willpower. Maybe I'm being paranoid but I just can't get over how compelling of an argument it felt, especially from our 'expert doctor' character.
Overall
I will always read Will Ferguson's work. If only to be reminded of what solid writing is. Ferguson likes to tackle somewhat controversial issues and ask the reader to see the other side. He does this so well in his bestselling book 419 (as we develop sympathy for our Nigerian scammer). In The Shoe on the Roof I think he has done a good job of presenting all arguments and leaving things open to interpretation of the reader. As the reader you get to decide or think on the different perspectives and make a decision for yourself; or determine that it's too complex to really know about. Really good books make you think and certainly this book made me think.
At the end of the day I was disturbed by some of the counter ideas in Ferguson's novel and even a couple days after finishing the book can't seem to shake them. So for that, and that I never felt drawn into the story in a really solid way, I will stand behind my 3 star review. Even though Ferguson is, without a doubt, a 5 star writer to me and I cannot wait to read his next book; whatever the topic might be.
Please note: I received an eARC of this book from the publisher via NetGalley. This is an honest and unbiased review.
Posted by Mel at 6:51 PM

Sounds like a topic that is difficult to tackle without stepping on any toes...coupled with a main character who might not neccessarily share the views of the reader or author, I could see myself feeling uncomfortable reading a book like this as well!