Well... I am still alive. Though it feels like barely. And I am still at work. Though very busy.
We had another trip to ER (that was useless) last week. But now I have an emergency GI appointment for next week (if you can believe that is the soonest I could get an emerg appt.) It's been all crazy. But I'm still holding on.

In the meantime I do have things to share with you. Some from quite a while ago. I will start with ComicCon that came to Calgary two weeks ago. I got a chance to go, even though I was pretty sick I managed to get through. I got to meet Tahmoh Pinkett (from shows Dollhouse and Battlestar Galactica)
Here is me with him and the autograph I got from  him: 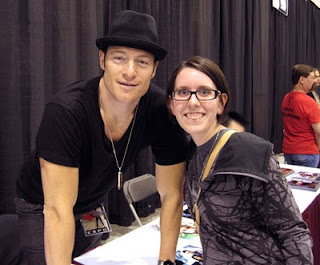 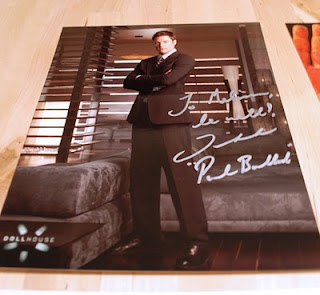 I had a hard time getting good photos as the lighting was bad and we weren't allowed to use a flash. But also at the convention were Malcolm McDowell (best known from a Clockwork Orange, or for killing Captain Kirk on Star Trek), Leonard Nimoy (of course Spock) and Peter Facinelli (Dr Carlisle from Twilight). Here are pics of Nimoy and Facinelli (from a far). 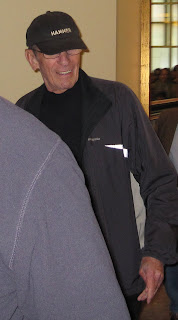 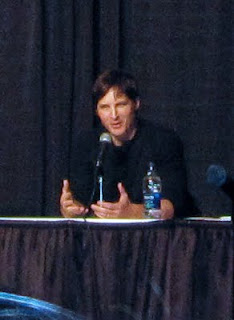 It was a pretty good time. Packed like crazy with fans and stuff but good. And I bought all kinds of new comics and things. ;)

In stitching news I have a finish!
It's my Smoke project, design by me, for the smoke project on my friend TulipTree's blog located here.
I will finish it into a little pinkeep or mini needle book I think.
But here is the stitching all done up: 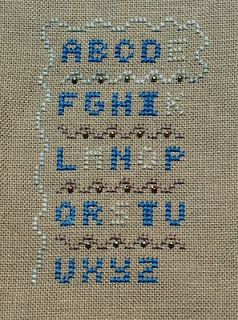 I was very flattered to be a part of TulipTree's project and want to thank her for the chance to participate. (for those that are not familiar with it, it was an interpretation in any creative way of smoke. I choose a sampler as it is the traditional cross stitch. I took the letters SMOKE and used a varigated thread to fade them out. The border is meant to represent smoke and it's transitions).

My last update is progress on my HAED SK, Elfland. From the first half of the year's SAL on their BB. I am behind... we only have one more month left in this SAL before the new one starts. And I am still on page one, not even page two! Ah well... I will see what the new SAL is and decide if I want to join or just finish up all my other many projects on the go. 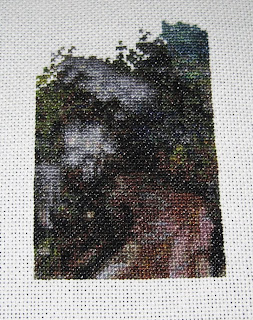 Dragons update: I have not stopped working on Dragons. Just haven't taken a pic in awhile. It has slowed down a bit, but I am confident that when work settles in two weeks and I am not working overtime that I can catch back up and finish my next page by the end of June (to keep with my 2010 goals). Thank you everyone for your understanding that I am not get around to blogs. I will try and catch up soon. But for now it's just hard to find the time between working lots and not feeling good.
Posted by Mel at 4:40 PM

Great pics of the ComCon, Mel :)

Congrats on your smoke finish... looking forward to seeing it finish-finished when you get the time.

That's a real bummer about the "emergency" doctor appt. I hope they can figure something out for you soon. ((hugs))

Hi Mel!! So nice to 'see' you!! Sorry you are still ERing; hope you get all that figured out and under control real soon!! Nice finish.

Nice finish - hope you're feeling better and they can find the problem.

Ooooooohhhhh, Peter Facinelli. YUM. Great pics! My son would give his left arm to go to a Comic Con. I'll have to show him this blog entry, he'll love seeing the pics.

Lovely stitching! I hope you are feeling better soon.

It's wonderful to "see" you. I am so jealous of the people you got to meet and see. I am a big sci-fi fan myself.

Your SMOKE looks wonderful. Great job on the interpretation.

Your stitching is beautiful.

I hope you are feeling better soon and that your not so emergency, emergency appt goes well. Answers, we all just want answers to our medical woes.

I had no idea Peter Facinelli as actually a brunette! Lovely stitching on the smoke design and I hope you feel much better soon :)

I am so sorry to hear that your health problems continue. :( I hope and pray that the doctors find the answer and help you soon.

I am glad that you were able to enjoy yourself at the con.

Keep stitching and I hope work eases up soon.

You have my full sympathy. I know what it's like trying to keep going when test are in the pipeline.

Looks like you had a fab time at Comicon. Love the finish, its a cute little design.

What an entertainment you had! Glad you've enjoyed it. Congrats on the finish and the progress on WIP.

Nice finish and great work on Elf. Looks like you had a good time at ComicCon. Hope you feel better real soon.

Sorry to hear you are still dealing with the unknown! Glad that you got some fun time at the convention and met some famous people. Your stitching is coming right along!

What a reat time you must have had at the convention. Enjoy the memories and pictures you brought home.
I hope you will be feeling better soon.