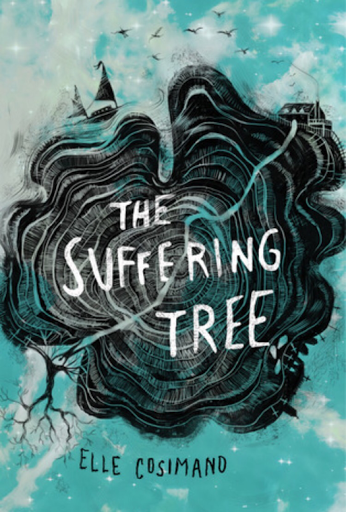 I have lots to say about this book so I'm going to try and break it all down for everyone. Starting with the aversion many have with this book.

Yes it is true our lead gal is a cutter. She self harms herself in about 8 described incidents (though I would argue that ones done for a spell are different), 4 of which are possibly graphic. I didn't think so but then again I dabbled with cutting as a teen myself and my husband had larger issues with it as a teenager. I think it's a really important issue that most writers shy away from. I've never read a novel where the lead character is a cutter and, given how widespread of a teen issue it is, it's occurred to me that we should probably be more concerned than we are.

So, why is this such a taboo subject?

I personally feel like those who have DNF'd or given 1 star because of the cutting content are incorrect. You can still dislike the overall book of course; and choose to say the book is not for you, but that doesn't mean it's bad or inappropriate. Especially if you DNF and don't witness the progression of the cutting issue. Right from page 1 it is not glorified or made out to be right. In fact the shame and fear our gal has over the issue, I think, sends a very good message to teens.

I'm not interested in arguing about this at length. This is merely my opinion. But as a previous cutter and having witnessed those who struggle with it even worse I think this is a really important, rarely discussed issue.

There is a lot of great content here. Between moving to a new town, dealing with death, stigma and corruption it has a good base. Then add in the historical context discussion indentured folks, slaves and witch trials: you suddenly have a well thought out book. There was more magic than I expected and I really enjoyed the jump between dreams of the past, and the past and present perspectives.

It's quite intricate and the overall family tree and past element felt a lot like Girl With the Dragon Tattoo for me. Add in our damaged cutting lead gal and you suddenly start to have a bunch of themes that crossover.

That said it's a teen book. While it's definitely not appropriate for less than 14 or 15 due to content, it is still not an adult novel.

The overall writing is quite good. There are some really annoying issues at times where someone has the answer to a crisis when they couldn't have had time to make a call and plan in the span of the two minutes between incident and telling others of a confirmed plan. So some holes. But for the most part they are not too hard to overlook.

I'd say on principle this book is 3.5 stars for me, but I bump it to 4 stars for being willing to tackle self harm and mutilation issues with teens.

Could it trigger someone? Sure.

Should it have mentioned self harm in the blurb... I dunno... maybe...

Ironically I felt the scenes in the past including whipping, switches and other torture methods was far more graphic and disturbing. I have noticed a tendency as a society to be okay with past violence as we believe it no longer happens today, so it's not as disturbing or something... there's a psychology paper in there somewhere.

I would recommend this book for adults who love magic that happens or is set in present day, those who enjoy a complex family tree and conspiracy, or anyone interested in a well done take on why teens (or others for that matter) inflict injuries upon themselves by choice.

I think any teen over 14 would be entranced by this novel.

Oh and I shouldn't forget to mention that the love interest is very unique. I liked it a lot. I especially appreciated he lack of love triangle, gushing about cuteness or hotness and that there is zero slut shaming. All things I'm more than tired of.

Overall I would recommend The Suffering Tree and I commend Elle Cosimano for tackling a hidden issue that needs to be brought to the surface even if it makes folks uncomfortable. In fact the more uncomfortable you are the more likely it is that the issue needs to be discussed!

I will give this book a try. Great review and explanation, I totally agree about how odd we can be as a society about what is "too" graphic and what is not.

Another one for the to-read list, and I fully agree with you - trying to 'shield' our youth from certain topics by not talking to them/presenting them in an age-appropriate way, those issues will not go away, if anything, teens will feel like they are all alone and 'strange' and that only makes thinks worse. Seeing how big of an uproar there was about 13 Reasons Why, I can see how a book like this would cause controversy as well, but I really want to read it now!