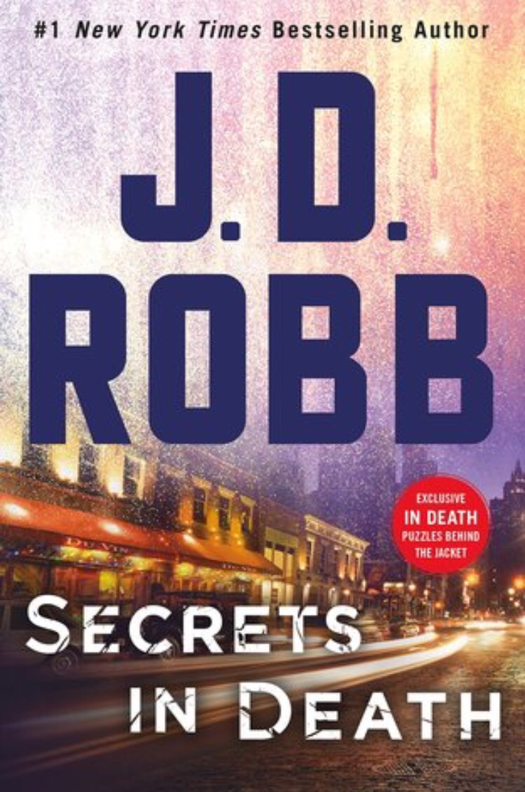 Without a doubt J.D. Robb's (Nora Roberts) books are a guilty pleasure. I can't help but read them and most of the time they are quick, easy, enjoyable reads. Unfortunately Secrets in Death was not on the list of compelling.

It's always difficult to care when Dallas and her folks catch a case where the deceased is easily disliked. But usually there is some part of you that feels a bit sad for them regardless. In Secrets it's clear that no one liked our dead celebrity and even throughout the course of the book everyone around Dallas is having a hard time being sad this awful woman is dead. Yet there is Dallas with her steadfast loyalty to the badge and unwillingness to compromise that her department defends the dead no matter what.

While the main story in this is really dull there is a very important moment in the long running series slipped into the middle of Secrets. One where we see Sommerset and Roarke having a one-on-one about some sticky items from the past.

While the news will not shock anyone, it's something readers have known for awhile now. It is the moment when Roarke learns the truth about an incident. So it has some possible impact on the overall relationship of our main characters.

The above sequence is the only reason I would say long time readers should bother with this book. If you're a new reader to this long running series them start earlier. In fact start with the Icove book. It's a pinnacle point in the series and you need to read it to understand what happens in many books later on.

All that said I will still keep reading In Death books because I'm a sucker for the world Robb had created and our messed up but lovable characters.

I have the same problems with crime shows...when the victim is someone I dislike immediately, I start rooting for the killer. At least a little. I was talking about this series with my mum a while back and it turns out she has quite a few of them...maybe I'll get her to lend me some someday :D