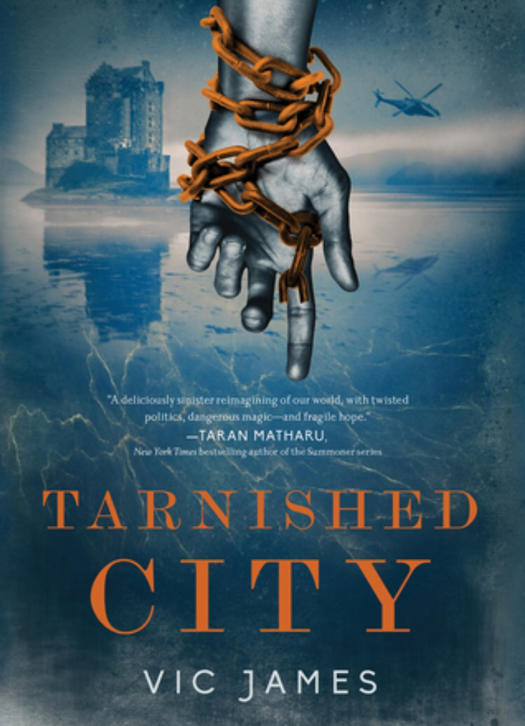 I was really hoping for an improvement over Book 1 (Gilded Cage). Unfortunately I think I got the exact same book in terms of pacing, boring political parts, intense action at the end, and only liking a few characters. I could probably lift my Gilded Cage review and put it in here with few edits.

It's really unfortunate because I really think Vic James has created a great world. But she has made the exact same mistakes in this second book that she did in the first. Now I realize it was possibly already written and whatnot before book 1 was released but given the timing between the books there would have been time to revisit it to make some improvements.

Any long time series reader knows what I mean. A trilogy usually has a middle book that is weaker than the rest. There is a little bit of that in Tarnished City. Certainly an inability to move the plot forward until the very end of the book is telling that it's all just a set-up for book 3.

I also think some second book syndrome set in here when it came to characters we heard from (each chapter is from one character Point of View). It's the same mistake George R.R. Martin makes in his later Song of Fire and Ice books; which is to drop certain character POVs (who are not dead) from the narrative. The problem with this is that if they are your beloved characters then it is harder to keep people's attention. I would have loved to see at least one or two chapters from Daisy (who has a unique view on everything now) and from the parents of our lead teens who are also now in a different location. Instead we get to hear from Garvan, Bouda, and others that I just don't care about that much. Yes they are important, but I'd honestly rather read about them and the politics from the viewpoints of more interesting people.

And don't even start me on the lack of Jenner point of views... (see note at bottom for rant).

I'll definitely read book 3 as I'm interested in where this goes. What I'm really hoping for is that after this series James can come out with something totally new in the YA fantasy genre and blow us away with everything she learned from writing her first trilogy. Because I really do believe there is potential here (she is amazing at writing cliffhanger endings and action sequences) it's just been diluted with poor choices and boring narrative in places.

Note: My fan girl self, for those familiar with the series, is very, very disappointed in the serious lack of Jenner in this novel. The last half he might as well (nearly) not exist until the very end. This was really hard for me to be okay with. I know James is holding back with him so that a mystery isn't revealed but I just missed him a lot. Not even because I'm a fan girl for him necessarily but because he has THE most unique situation of all (and isn't a child).

When you did the review on book one last year, I really really wanted to read it, but I still haven't gotten around to doing so. Hopefully I'll get there, even if the sequel is suffering from second book syndrome!