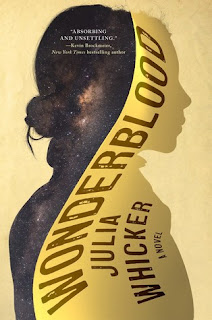 Title: Wonderblood
Author: Julia Whicker
Genre: Science Fiction, Literary
Rating: 4 out of 5 stars
While the setting and dystopian features of Wonderblood may not sound different from the average dystopian book; it is certainly in the literary realm of Station Eleven and Cloud Atlas.
The story takes place in the continental USA when a disease has ravished the country and not only killed many but contaminated the actual soil of the earth. The style and tone of Julia Whicker's writing is very literary. One of the religions uses historical space shuttle names as a part of their lore. Ironically there are no space excursions or futuristic elements to Wonderblood even though it is set in the future. It has a little magic, a little science, a little horror; but a lot of beautiful and thought bending prose.

Writing Style
A huge portion of the experience reading Wonderblood is being immersed in the literary style that Whicker employs. You could just as easily have been reading a historical account. The setting is the future but it's a nomadic (no technology) world and so it feels different from the average sci-fi novel. The 'magic' in the book is rooted in scientific concepts but they are not explained or analyzed in the context of modern science. Finally, there is lots of blood but it's not described in a horrific way that feels like a horror story.
Wonderblood is, at its core, a literary book. The mood of the writing is as much the story as the actual plot and characters themselves. The use of descriptors (woman, girl, man) instead of names, when we are experiencing the world from certain points of view, reinforces that there is a theme to the way the story is told. This tone and style affects how the story feels as you read it. It's more than just a story about people in tough times.

Yes it's awful...but not like you think
It's very difficult to write a dystopian story without having a lot of blood and death. It's just the nature we expect from dystopian books. Whicker certainly doesn't shy away from the horrors of her futuristic societies (we follow two different religious/social groups); but she also doesn't emphasize them either. From certain points of view the blood is horrific, and from others it's just part of a ritual. In some instances carrying a rotting head around is terrifying and disgusting; but for others it's comforting and a way of life. Whicker has normalized some of the horror to a point where we start to understand why some of our characters don't comprehend that what they are doing is perhaps morally objectionable.

Religion
I think using the names of space shuttles to form the basis for a religion is a cute nod towards the science fiction genre. It’s easy to get caught up in the intricacies of each group’s religious practices that define their morals, laws, personal interactions, rituals, etc. As with most religions there are important books or texts and being able to read and interpret them is of value. The core elements of most religions exists here and yet these two religions are far from our own. Whicker is, I believe, making a point about religion throughout the book. She uses elements from our true past and skews them into these new religious groups. The insinuation, of course, is that perhaps we don't interpret or understand the culture or context of the ideals we worship. A bit of a jab at religion in general; which is ironic given the importance of the two competing religions to the book.

Characters & Plot
If you're looking for an in-depth character analysis or active intricate plot you've probably got the wrong book. The core of Wonderblood is the analysis of what drives and motives humans to be a certain way. There is no real plot except that a comet appears in the sky and our two religious groups react to this appearance. For me that was enough plot to set-up the reasons why things start to happen; but I could see how many may find this book to be too unsubstantial or lacking focus because there is no real purpose to the story other than to explore morals, faith and human nature.

Overall
I really enjoyed this book. Upon finishing it I instantly wanted to read it again. Wonderblood is a book that could easily be analyzed and studied in any classroom at any level. It’s the kind of book people will love to hate as its literary style may be a bit more challenging than your average read. Therefore you have to put some effort into reading Wonderblood as it is riddled subtle and symbolic events and thoughts. For me, the effort was worth it. I loved contemplating the intricacies. Had I read this book as a teen I could see it having a profound impact on me (assuming I read it all the way through). As it was, even as an adult, I loved how much it made me think. I will definitely be purchasing this book for my print library. I cannot wait to read it again and revisit the morals, concepts and ideals set-up in this dystopian future.

Please note: I received an eARC of this book from the publisher via NetGalley. This is an honest and unbiased review.
Posted by Mel at 6:24 PM

Sounds really good...I like this kind of books from time to time, that make you think about things more general than just the content of the book itself.